Why Pet Food Banks are so Important

A number of "pet food banks" are cropping up across the UK, while animal rescue charities say some hard-up owners are giving away pets they cannot afford to feed. So what is the problem and how are animal lovers helping?

Audrey Teller and her Partner Stewart run a pet food bank from their home in Cumbernauld, where they store food for dogs, cats, hamsters, fish and rabbits in their spare bedroom and a neighbour's garage, they rely on donations from members of the public, supermarkets and pet food retailers - and ferry the supplies to local pet owners. They said: "We're getting busier, especially as it's the run-up to Christmas. Most people who come to us have lost jobs, or are on benefits sanctions, and are already going to normal food banks." The charity is becoming more recognised and used by the public, Audrey said: "A vet I know recently donated some flea solution that was about to go out of date, that's quite expensive normally"

Audrey, who is a full-time counsellor, admits the pressure to meet demand from local families has become "enormous", saying the bank has fed 650 animals since it began in January 2016. She commented: "You don't realise it, but pets are often the only thing that keep you going if you've lost everything."

And they are not alone - pet food banks are operating across the UK, including in London, Ely in Cambridgeshire, Market Harborough in Leicestershire and Denbighshire in Wales! 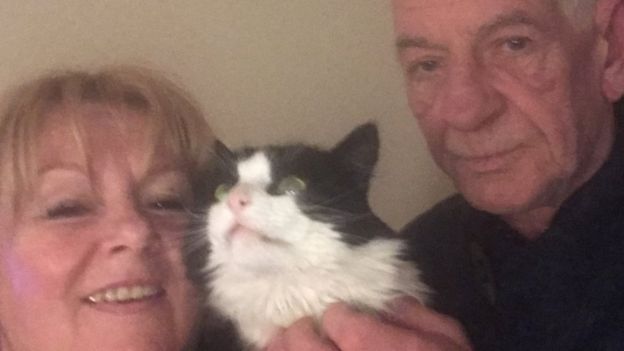 Marjorie Summerfield, who set up Denbighshire's first pet food bank in July, says: "If we can intervene before a pet has to be rehomed, surely that's better for the animal and their owner."

Another pet food bank founder, Lisa Parratt, from Market Harborough, told BBC Radio Leicester this week: "We've been open officially a week and a half - and so far we've had three people come forward for help already."

Pet owners can usually find local food banks through Facebook or via word of mouth.Although food banks are open to everybody might be asked for proof they are on benefits, or a pension, although some food banks do not ask any questions.

Tina, who runs a pet food bank in Craigneuk, one of Scotland's most deprived areas, says: "People come to me and say: 'I am struggling, I don't ask them to explain why - if they're taking advantage of me then so be it." She began the bank just six weeks ago after a local rescue worker gave her 138 bags of dog food - she says she has 12 left. She said: "I get fed up of people having to give their dogs up because they can't afford to feed them." 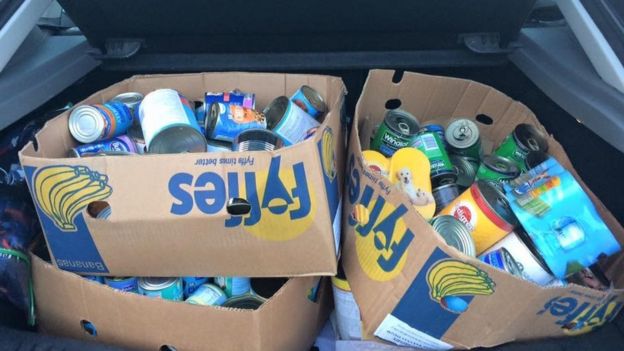 But are pets really going hungry?

Battersea Dogs and Cats Home, which takes in 7,000 animals a year, said most pet owners do not like to admit to financial difficulties if they give their pet up for adoption and less than 2% of owners who gave up their pet to the charity's three centres this year cited financial reasons. Instead, most said their circumstances had changed (37%) or that they were no longer able to look after their animal (61%).

Debbie Chapman, from the charity, says: "Whether that's because they think we won't take in their pet with that reason, or whether they are too proud to admit that, or think they will be judged badly, we don't know."

But Jenna Martyn, a re-homing manager at Blue Cross, says money problems are often an issue for people giving up their pet. She commented: "People might tell us they're having to move house - which could be very likely because of financial reasons,we ask that people always contact a charity for help and don't just abandon their pets to fend for themselves. More than 80,000 dogs are abandoned by their owners in the UK a year, according to the Dogs Trust and end up in council pounds and may be put down if their owners are not found.

Lynsey Murray, founder of Glasgow-based dog rescue charity Cleo's Mutley Crew, describes this time of year as "chuck-out season". She said "People don't want to be buying dog food - they want presents for their family, or if they have children to feed may feel like they don't have a choice."

She began the rescue service three years ago, re-homing about 100 kennel dogs a year from the Lanarkshire and Glasgow area, on top of her job as an audiologist. But Lynsey insists pet owners do have a choice, no matter how difficult their circumstances are:

"Food is a problem, but you can get a bag of really bland food for a big dog for £8 to £10 and that lasts a month," she said. "The bigger cost is medical care, and if a person can't afford pet food then that animal also isn't going to the vet."